The use and Purpose of Gongura A.K.A Roselle plant or Hibiscus sabdariffa

GonguraGongura is known as Pitwaa in Hindi, Kotrum in Jharkhand, Mestapat in Bengali, Amaari in Chhattisgarhi, Pandi/Pundi SOPPU in Kannada, Anthur in Mizo, Sougri in Manipuri, Sankokda in Punjabi, Aamelli in Chakma, Mwitha in Bodo, Kenaf Leaves in English, and Chin Baung in Chinese. Gongura is a summer crop, and the hotter the place, the more sour the leaf gets. Sold on a street in Andhra Pradesh Gongura is popular in the state of Andhra Pradesh, Karnataka, Manipur, Tripura and also Mizoram. gongura or sour spinach is good for sex. sexual weakness 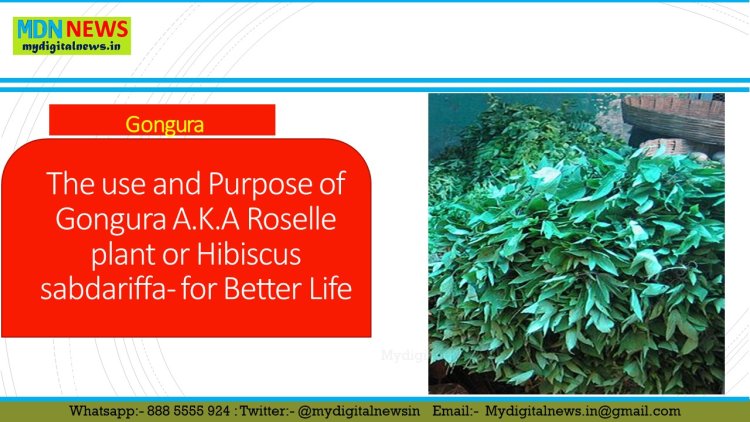 The use and Purpose of Gongura A.K.A Roselle plant or Hibiscus sabdariffa

Gongura is the form of the roselle plant (Hibiscus sabdariffa) grown for its edible leaves in India and in other countries like Fiji. These leaves are used in south-central Indian cuisine to impart a tart flavour.

Gongura pacchadi, a form of chutney or relish, is a quintessential part of Andhra cuisine. Telugu people, mainly from Andhra Pradesh, locally call it Andhra Matha (mother Andhra) in Telugu due to its significance in their daily diet. While it has many culinary uses, the most popular version is the pickled form.

Although Gongura is widely consumed in homes all over Andhra Pradesh, Gongura is more popular in hotels, restaurants, eateries and food joints.

Gongura is also grown in Karnataka, Odisha, Tripura, Arunachal Pradesh (north east region of India) and some parts of Chittagong Hill Tracts region in Bangladesh (which is mainly a tribal people region).

Roselle consists of Phosphorous that has the ability to remove minor health problems like muscle weakness, numbness, fatigue and other similar ailments. Normal levels of phosphorous in the body are a great way to remain fit and active.

A normal amount can be around 1200 mg for adults, according to experts and from suggestions of various health practitioners. Sexual weakness can also be cured with healthy supplementation of phosphorous into the body, so issues like loss of libido, frigidity, impotence, and sperm motility can be boosted by having an adequate supply of phosphorus in your system.

The famous combination with pulichakeerai is Ragi Kali/Ragi Mudde, which once used to be a regular food for the people in villages (since these items are easily available in agricultural forms). In Marathi, it is called Ambaadi (अंबाडी).

And is specially prepared to a stew and served to goddess Mahalakshmi/Gauri during the annual festival of Mahalakshmi which falls on three days in between the ten days Ganesha Chaturthi festival in Maharashtra.

Gongura is a summer crop, and the hotter the place, the more sour the leaf gets. Sold on a street in Andhra Pradesh Gongura is popular in the state of Andhra Pradesh, Karnataka, Manipur, Tripura and also Mizoram.

A baby gongura leaf is a full leaf. As the leaf grows older, the leaf splits into four or more parts. Drying gongura for pickle:- Other well-known recipes made with Gongura as the main ingredient are Gongura pappu (lentils), Gongura mamsam (goat/mutton) and Gongura royyalu (shrimp).

In recent times, Gongura Chicken is also being served in restaurants. Gongura and calabash is extremely popular with the Telugu community in South Africa.

Gongura is also eaten by Acholi and Lango people in northern Uganda, where it is known as malakwang.

In the Bodo Community of Assam too, 'Gongura' called as 'Mwitha' is taken very frequently, it is prepared as curry with pork, 'Mwitha-Oma', with pond fish as 'Mwitha-na' with prawns as 'Mwitha-nathur'.

The leaves having sour tastes and slippery texture blends easy and makes a wonderful dish with non-veg items.

The Bodo community believes that intake of sour helps in fighting the scorching summer heat and prevents illness.

Sensational Comments by Proff. Chandrapati - is it Logical or illogical find out...

Naira shah Too hot handle for Youth-with a Golden Skin...