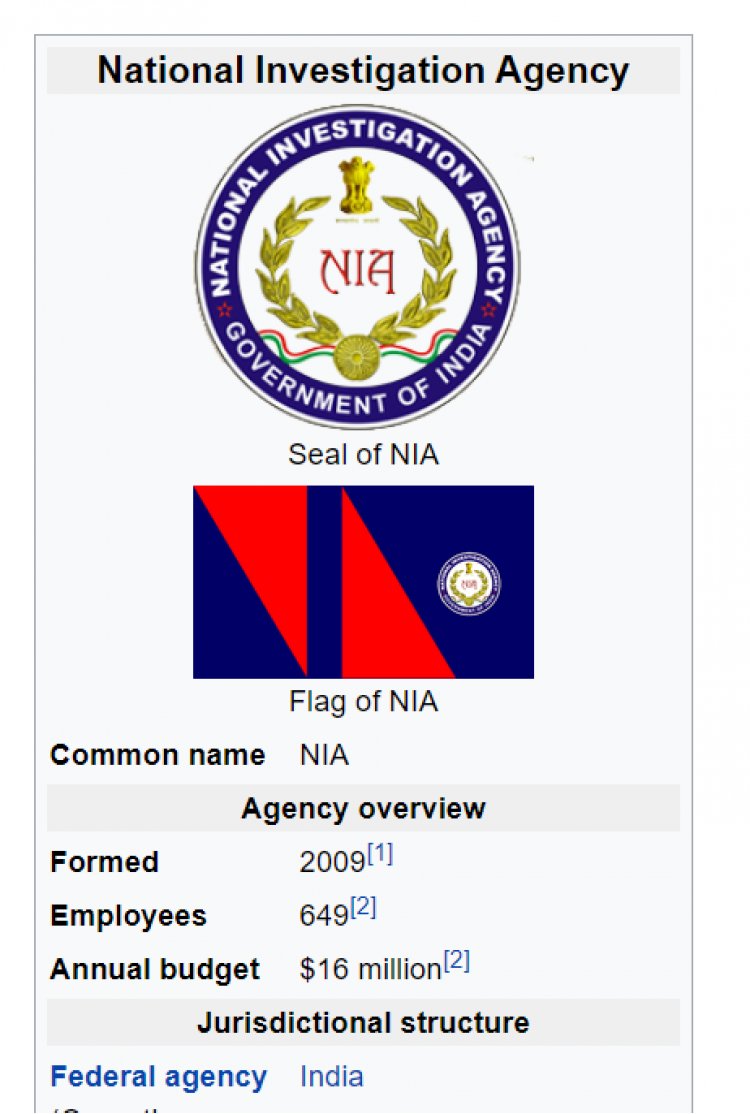 The National Investigation Agency (NIA) is India's counter-terrorism task force. The agency is empowered to deal with terror-related crimes across states without special permission from the states. The Agency came into existence with the enactment of the National Investigation Agency Act 2008 by the Parliament of India on 31 December 2008, which was passed after the deadly 26/11 terror attack in Mumbai. Such an attack clearly surfaced the failure of intelligence and ability to track such activities by existing agencies in India, hence the government of India realized the need for a specific body to deal with terror-related activities in India, thereby establishing the NIA. Headquartered in New Delhi, the NIA has branches in Hyderabad, Guwahati, Kochi, Lucknow, Mumbai, Kolkata, Raipur and Jammu. It maintains the NIA Most Wanted list. The founding Director-General of NIA was Radha Vinod Raju, and he served till 31 January 2010. He was succeeded by Sharad Chandra Sinha till March 2013. Navneet Rajan Wasan held full charge of DG till July 2013. In July 2013, Sharad Kumar was appointed as the Chief of National Investigation Agency. In 2017, Y. C. Modi was named as Chief of NIA in September.

A Bill for the formation of the National Investigation Agency was passed by Parliament in December 2008. As per the Bill, NIA has concurrent jurisdiction which empowers the Central Agency to probe terror attacks in any part of the country, covering offences, including challenges to the country's sovereignty and integrity, bomb blasts, hijacking of aircraft and ships, attacks on nuclear installations. The amendments to the NIA Act has brought the offences relating to the smuggling in High-Quality Counterfeit Indian Currency under the definition of a terrorist Act aimed at damaging the monetary stability of the country and therefore can be investigated by the NIA.

The ground staff of the agency in the national capital could be drawn from existing central staff and security organisations while in the states, the permanent deputation from the state police could be taken. The National Investigative Agency Bill and Unlawful Activities (Prevention) Amendment Bill on Tuesday, 30 Dec 2008, became law as President Pratibha Patil gave her assent to the legislation which was passed in the last session of the parliament.

The NIA (Amendment) Bill 2019 was passed by the parliament on 17 July 2019. The Bill aims to give more teeth to the investigating powers of the NIA. It empowers the NIA to probe terror attacks targeting Indians and Indian interests abroad.[12] The amended legislation, which aims to primarily empower the anti-terror agency to investigate scheduled offences such as human trafficking; circulation of fake currency; manufacture and sale of prohibited arms; and cyber-terrorism, was passed with a majority of 278 votes in favour and six against in the Lok Sabha. It was also passed in the Rajya Sabha after those opposed to it staged a walkout.[13] This amendment will now also allow NIA to investigate the Sri Lanka Easter Bombings and Kabul Gurudwara bombing.

The National Investigation Agency aims to be a thoroughly professional investigative agency matching the best international standards. The NIA aims to set the standards of excellence in counter-terrorism and other national security-related investigations at the national level by developing into a highly trained, partnership-oriented workforce. NIA aims at creating deterrence for existing and potential terrorist groups/individuals. It aims to develop as a storehouse of all terrorist-related information.

In the constitution of India, law and order is a state subject. There have been questions raised on how NIA is usurping state rights under the guise of fighting terror. A US Embassy cable accessed by The Hindu says that union home minister P Chidambaram told FBI Director Robert Mueller that National Investigation Agency's powers could be challenged in the courts as violating constitutional provisions on Centre-State relations.[30] In 2020 Chhatishgarh state filed a case against the act in the supreme court that the said act violates the constitution.

Protection against arrest and detention in certain cases:...

Fundamental Rights of constitution of india