A Trip Back in Time: How People Talked About Asteroid Impact Deflection Assessment 20 Years Ago

AIDA is a project that seeks to explore the defence mechanism against a potential asteroid threat through deflection. Collaboration between NASA and ESA. It is a double-spacecraft mission. The target is the smaller of two bodies in the “double Didymos asteroids”. These are in orbit between Earth and Mars. The project aims to deflect the orbit of the smaller body through an impact by one spacecraft. 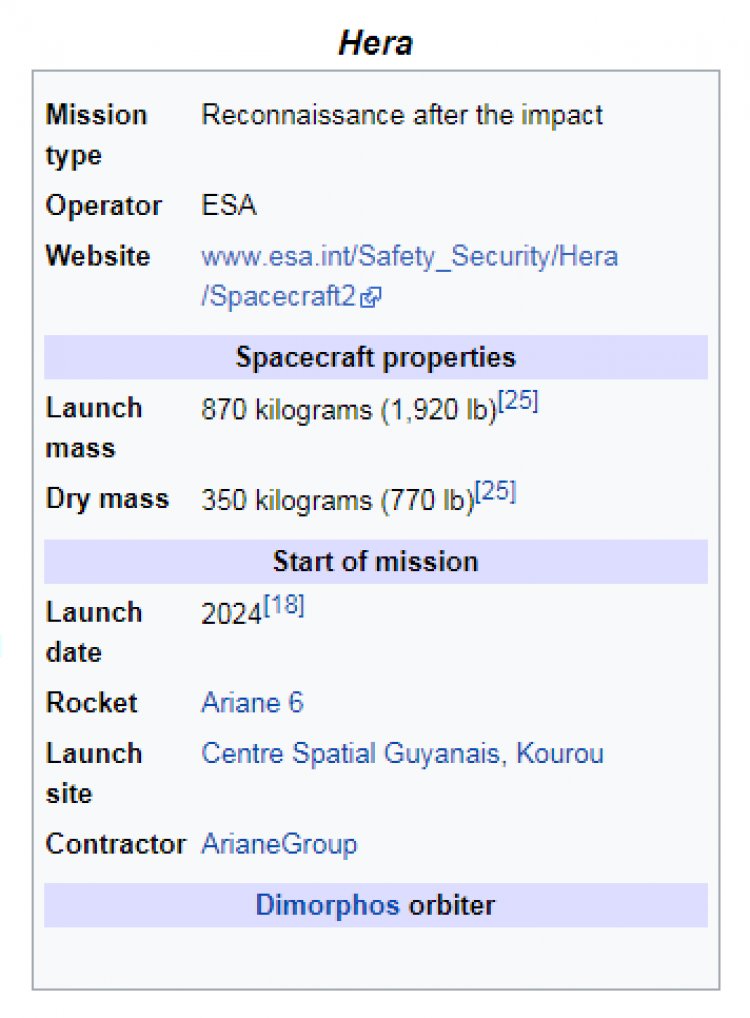 The Asteroid Impact and Deflection Assessment (AIDA) mission is a proposed pair of space probes that will study and demonstrate the kinetic effects of crashing an impactor spacecraft into an asteroid moon. The mission is intended to test and validate impact models of whether a spacecraft could successfully deflect an asteroid on a collision course with Earth. The original plan called for a European spacecraft, the Asteroid Impact Mission (AIM), to operate in synergy with a large NASA impactor called Double Asteroid Redirection Test (DART) and observe the immediate effects of the impact. AIM was canceled in 2016 when Germany was unable to fund its portion, and after some backlash within ESA, AIM was replaced in 2018 with a smaller spacecraft called Hera that will launch five years after DART to orbit and study the crater on the asteroid. DART is currently planned to impact in 2022 in the small moon of asteroid 65803 Didymos, while Hera will arrive at Didymos in 2027, five years after DART's impact.

Initially, Hera's role was to be realized by a much larger spacecraft called Asteroid Impact Mission (AIM), which would have observed the plume, the crater, and the freshly exposed material to provide unique information for asteroid deflection, science, and mining communities. In December 2016, the European Space Agency (ESA) canceled the development of the AIM spacecraft after Germany decided to fund the ExoMars project only. Germany offered to cover only 35 million of the 60 million needed for the AIM portion to continue, and this was not enough to continue development. Had AIM been developed, its notional requirements in 2012 were:

Nevertheless, NASA has continued the development of the DART mission to 65803 Didymos, and plans to measure the effects of the impact from ground-based telescopes, and from an Italian CubeSat DART will bring along. Following AIM's cancellation, ESA director Jan Wörner stated his intentions to revive the European mission in some form. Etienne Schneider, Luxembourg's deputy prime minister, expressed regret at AIM's cancellation and commented that his country would continue to advocate for the realization of the mission.

By March 2018, Hera's proposal was in Phase B1, where the preliminary design was being drawn up. On 7 January 2019, the Hera team announced the selection of two CubeSats to piggyback on the mission: APEX and Juventas. ESA officials approved Hera in November 2019 for a 2024 launch. The Italian Space Agency (ASI) decided in 2018 to contribute to NASA a secondary spacecraft called LICIA (Light Italian CubeSat for Imaging of Asteroids), a 6-unit CubeSat that will piggyback with DART and will separate shortly before impact to acquire images of the ejecta as it drifts past the asteroid.

The AIDA mission is a joint international collaboration of the European Space Agency (ESA), the German Aerospace Center (DLR), Côte d'Azur Observatory (OCA), NASA, and Johns Hopkins University Applied Physics Laboratory (JHU/APL). The miniature lidar instrument onboard Hera will be provided by a consortium of teams from Portugal, Poland, and Ireland. Two CubeSats will be deployed by Hera while at Didymos: The APEX (Asteroid Prospection Explorer) CubeSat is being developed by Sweden, Finland, Czech Republic, and Germany.[24] The Juventas CubeSat is being developed by GomSpace and GMV's Romanian division. Along with surveying DART's impact crater, Hera may also carry a Japanese impactor that would be a replica of the Small Carry-on Impactor (SCI), onboard the Hayabusa2 asteroid sample return mission. NASA's DART will bring along a 6U CubeSat called LICIA which is being developed by the Italian Space Agency (ASI) to image the ejecta plume.

Hera is the European component of the ESA–NASA AIDA mission. The Hera spacecraft, approved on 29 November 2019, will focus on key measurements to validate impact and asteroid deflection models such as the detailed characterization of the impact crater made by the DART impactor. Hera will also measure the DART impact outcome, such as a change in the binary system orbit, and will enable detailed characterization of the Dimorphos volume and surface properties, as well as to measure the volume and morphology of the DART impact crater. The baseline payload of Hera is still in flux, and it includes a camera, a miniaturized lidar, and two 6U CubeSats dedicated to asteroid characterization. The spacecraft design allows for 40 kilograms (88 lb) of additional payload mass, including the Small Carry-on Impactor (SCI) proposed by Japan's space agency JAXA. Other options, such as a small lander, are being considered. Hera will be launched on an Ariane 6 in 2024.

The notional payloads on Hera are:

Asteroid Framing Camera to obtain information on the dynamics of a binary asteroid and physical characteristics. Lidar laser altimeter to measure the shapes of the two bodies and constrain the mass of the asteroid's moon. Thermal imager APEX (Asteroid Prospection Explorer) is a 6-unit CubeSat for spectral imaging and magnetic observations. It will attempt to land on the asteroid surface for close-up data. Juventas is a 6-unit CubeSat carrying a camera and a low-frequency radar (Jura), for determining the internal structure of Dimorphous. It will operate for 3–6 months near the asteroid. At the end of its mission, it will attempt a landing on the surface of Dimorphos to obtain close-up data. An optional impactor may also be carried by Hera. It would be a replica of Japan's Small Carry-on Impactor (SCI) onboard the Hayabusa2 asteroid sample return mission. By performing a secondary impact (the primary impact being DART's), a comparison of the effects posed by two collisions of different nature on the same asteroid can be realized, helping validate numerical impact algorithms and scaling laws.

DART or Double Asteroid Redirection Test is a 500 kilograms (1,100 lb) impactor that hosts a single camera, Didymos Reconnaissance and Asteroid Camera for OpNav (DRACO) to support autonomous guiding to impact the moon of (Didymos B) through its center. It also carries an Italian-built CubeSat called LICIACube that will be released pre-impact to image the event. It is estimated that the impact of the 500 kilograms (1,100 lb) DART at 6 kilometers per second (3.7 mi/s) will produce a velocity change on the order of 0.4 mm/s, which leads to a small change in the orbit of the Didymos B, but over time, it leads to a large change in the orbital position (or orbital phase).

Double Asteroid Redirection Test (DART) is a planned space probe that will visit the double asteroid Didymos and demonstrate the kinetic effects of crashing an impactor spacecraft into an asteroid moon for planetary defense purposes. The mission is intended to test whether a spacecraft's impact could successfully deflect an asteroid on a collision course with Earth. A demonstration of an asteroid deflection is a key test that NASA and other agencies wish to perform before the actual need for planetary defense is present. DART is a joint project between NASA and the Johns Hopkins Applied Physics Laboratory (APL), and it is being developed under the auspices of NASA's Planetary Defense Coordination Office. In August 2018, NASA approved the project to start the final design and assembly phase.

AIDA will target 65803 Didymos, a binary asteroid system in which one asteroid is orbited by a smaller one. The primary asteroid is about 800 meters (2,600 ft) in diameter; its small satellite is about 150 meters (490 ft) in diameter in an orbit about 1.1 km from the primary. Didymos is not an Earth-crossing asteroid, and there is no possibility that the deflection experiment could create an impact hazard to Earth. The impact of the 300 kilograms (660 lb) DART spacecraft at 6.25 km/s will produce a velocity change on the order of 0.4 mm/s, which leads to a significant change in the mutual orbit of these two objects, but only a minimal change in the heliocentric orbit of the system. AIDA will provide a great benefit in obtaining the size of the resulting impact crater in addition to the momentum transfer measurement, as the effects of porosity and strength of the target are needed to calculate the momentum transfer efficiency.

Are You Getting the Most Out of Your The Joint Comprehensive Plan Of Action? :JCPOA