Are You Getting the Most Out of Your The Joint Comprehensive Plan Of Action? :JCPOA

US President Biden has promised to rejoin the nuclear deal. Signed in 2015, but former US President Trump has withdrawn from it (in 2018). It was signed among Iran and p5+1 (China, France, Germany, Russia, the United Kingdom, the United States, and the European Union, or the EU). Iran has agreed to significantly cut its stores of centrifuges, enriched uranium and heavy water, all key components for nuclear weapons. The US's withdrawal resulted in sanctions against Iran and also brought Iran to enrich uranium again, threatening the stability of the region. 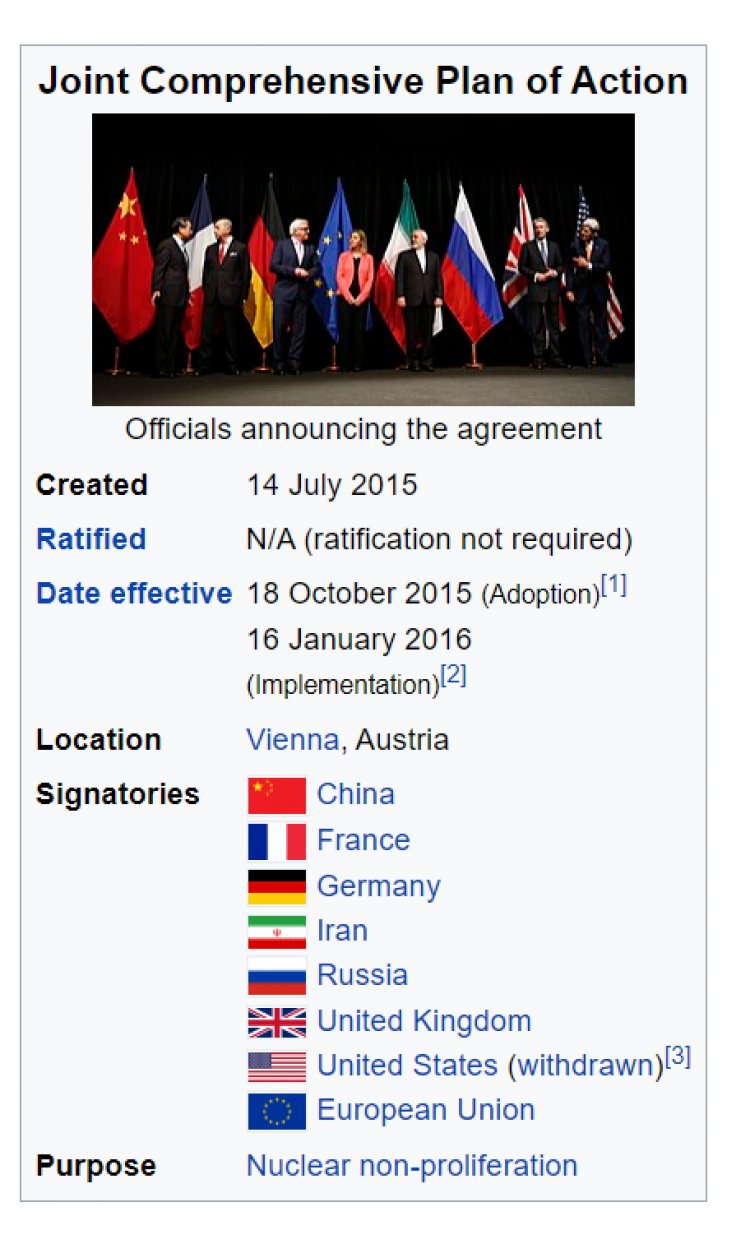 The Joint Comprehensive Plan of Action JCPOA known commonly as the Iran nuclear deal or Iran deal is an agreement on the Iranian nuclear program reached in Vienna on 14 July 2015, between Iran and the P5+1 (the five permanent members of the United Nations Security Council—China, France, Russia, United Kingdom, United States—plus Germany) together with the European Union.

Under the JCPOA, Iran agreed to eliminate its stockpile of medium-enriched uranium, cut its stockpile of low-enriched uranium by 98%, and reduce by about two-thirds the number of its gas centrifuges for 13 years. For the next 15 years, Iran will only enrich uranium up to 3.67%. Iran also agreed not to build any new heavy-water facilities for the same period of time.

Uranium-enrichment activities will be limited to a single facility using first-generation centrifuges for 10 years. Other facilities will be converted to avoid proliferation risks. To monitor and verify Iran's compliance with the agreement, the International Atomic Energy Agency (IAEA) will have regular access to all Iranian nuclear facilities.

The agreement provides that in return for verifiably abiding by its commitments, Iran will receive relief from the U.S., European Union, and United Nations Security Council nuclear-related sanctions. On 12 October 2017, U.S. President Donald Trump announced that the United States would not make the certification provided for under U.S. domestic law, but stopped short of terminating the deal.

IAEA Director Yukiya Amano stated (in March 2018) that the organization has verified that Iran is implementing its nuclear-related commitments. On 30 April 2018, the United States and Israel said that Iran had not disclosed a past covert nuclear weapons program to the IAEA, as required by the 2015 deal.

On 8 May 2018, Trump announced the United States withdrawal from JCPOA. Following the U.S.'s withdrawal, the EU enacted an updated blocking statute on 7 August 2018 to nullify U.S. sanctions on countries trading with Iran. In November 2018 U.S. sanctions came back into effect intended to force Iran to dramatically alter its policies, including its support for militant groups in the region and its development of ballistic missiles.

In May 2019, the IAEA certified that Iran was abiding by the deal's main terms, though questions were raised about how many advanced centrifuges Iran was allowed to have, as that was only loosely defined in the deal. On 1 July 2019, Iran announced that it had breached the limit set on its stockpile of low-enriched uranium, which the IAEA confirmed.

On 5 January 2020, in the aftermath of the Baghdad Airport Airstrike that targeted and killed Iranian general Qassem Soleimani, Iran declared that it would no longer abide by the deal's limitations but would continue to coordinate with the IAEA, leaving open the possibility of resuming compliance.

Prolonged conflict of Iran with U.S. and European countries, 2007–2015 Four more UN Security Council resolutions concerning Iran's nuclear program followed: 1747 (March 2007), 1803 (March 2008), 1835 (September 2008), and 1929 (June 2010). In Resolution 1803 and elsewhere the Security Council acknowledged Iran's rights under Article IV of the NPT, which provides for "the inalienable right ... to develop research, production and use of nuclear energy for peaceful purposes".

In a February 2007 interview with the Financial Times, IAEA director-general Mohamed ElBaradei said that military action against Iran "would be catastrophic, counterproductive" and called for negotiations between the international community and Iran over the Iranian nuclear program.

ElBaradei specifically proposed a "double, simultaneous suspension, a time out" as "a confidence-building measure", under which the international sanctions would be suspended and Iran would suspend enrichment.

ElBaradei also said, "if I look at it from a weapons perspective there are much more important issues to me than the suspension of [enrichment]," naming his top priorities as preventing Iran from "go[ing] to industrial capacity until the issues are settled"; building confidence, with "full inspection" involving Iranian adoption of the Additional Protocol; and "at all costs" preventing Iran from "moving out of the [treaty-based non-proliferation] system".

In September 2009 U.S. President Barack Obama revealed the existence of an underground enrichment facility in Fordow, near Qom, saying, "Iran's decision to build yet another nuclear facility without notifying the IAEA represents a direct challenge to the basic compact at the center of the non-proliferation regime."

Israel threatened to take military action against Iran.[29] U.S. Secretary of State John Kerry shakes hands with Iranian Foreign Minister Javad Zarif after the P5+1 and Iran concluded negotiations about Iran's nuclear capabilities on November 24, 2013 In March 2013 the United States began a series of secret bilateral talks with Iranian officials in Oman, led by William Joseph Burns and Jake Sullivan on the American side and Ali Asghar Khaji on the Iranian side. In June 2013 Hassan Rouhani was elected president of Iran. Rouhani has been described as "more moderate, pragmatic and willing to negotiate than Ahmadinejad".

In August 2013, three days after his inauguration, Rouhani called for a resumption of serious negotiations with the P5+1 on the Iranian nuclear program. In September 2013 Obama and Rouhani spoke by telephone, the first high-level contact between U.S. and Iranian leaders since 1979, and U.S. Secretary of State John Kerry met with Iranian foreign minister Mohammad Javad Zarif, signalling that the two countries were open to cooperation.

Former officials alleged that, in order to advance the deal, the Obama administration shielded Hezbollah from the Drug Enforcement Administration's Project Cassandra investigation regarding drug smuggling and from the Central Intelligence Agency.

As a result of the Politico report, Attorney General Jeff Sessions ordered an investigation to determine the veracity of the allegations. On 24 November 2013, after several rounds of negotiations, the Joint Plan of Action, an interim agreement on the Iranian nuclear program, was signed between Iran and the P5+1 countries in Geneva, Switzerland.

It consisted of a short-term freeze of portions of Iran's nuclear program in exchange for decreased economic sanctions on Iran, as the countries work towards a long-term agreement. The IAEA began "more intrusive and frequent inspections" under this interim agreement.

The agreement was formally activated on 20 January 2014. That day, the IAEA issued a report stating that Iran was adhering to the terms of the interim agreement, including stopping enrichment of uranium to 20%, beginning the dilution process (to reduce half of the stockpile of 20% enriched uranium to 3.5%), and halting work on the Arak heavy-water reactor.

A major focus on the negotiations was limitations on Iran's key nuclear facilities: the Arak IR-40 heavy water reactor and production plant (which was under construction, but never became operational, as Iran agreed as part of the November 2013 Joint Plan of Action (interim agreement) not to commission or fuel the reactor); the Bushehr Nuclear Power Plant; the Gachin uranium mine; the Fordow Fuel Enrichment Plant; the Isfahan uranium-conversion plant; the Natanz uranium enrichment plant; and the Parchin military research and development complex.

A July 2015 Congressional Research Service report said, "statements from the U.S. intelligence community indicate that Iran has the technological and industrial capacity to produce nuclear weapons at some point, but the U.S. government assesses that Tehran has not mastered all of the necessary technologies for building a nuclear weapon.

A Trip Back in Time: How People Talked About Asteroid Impact Deflection Assessment...