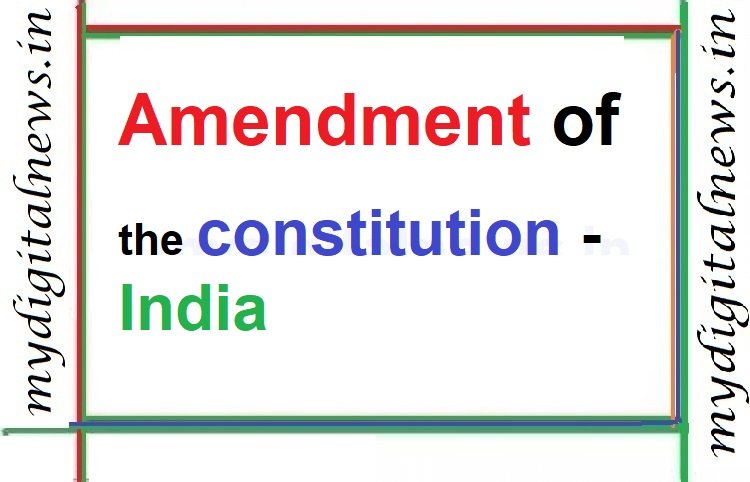 There have been 104 amendments in the Constitution of India up to January 2020. The latest amendment has extended the reservation of seats for SCs and STs in the state assemblies and Lok Sabha. The first amendment took place in 1950

To suit the changing needs of the society and serve the people for a long time enough room was provided to the constitution for its growth and future needs in the form of amendment procedures. To facilitate this framers of the constitution have tried to avoid extreme rigidity and extreme flexibility and have steered a middle course. There are three different methods for the amendment of the Indian constitution. Each method is applied in connection with certain specific provisions.

Article 368 of the constitution

It provides for the amendment of the constitution of India. According to the first provision the federal provisions of the constitution can be amended when the bill for the amendment is passed in both the houses voting separately with a majority of the total membership of the house and two-thirds of the members present and voting therein. The bill is then sent to the states and it should be approved by at least half of the state legislatures before it is approved by at least half of the state legislatures before it is presented to the president for his assent. Amendments to the Constitution are made by the Parliament, the procedure for which is laid out in Article 368. An amendment bill must be passed by both the Houses of the Parliament by a two-thirds majority and voting. In addition to this, certain amendments which pertain to the federal nature of the Constitution must be ratified by a majority of state legislatures. As of January 2012 there have been 115 amendment bills presented in the Parliament, out of which 97 have been passed to become Amendment Acts. (as of 2020 there were 104th amendments (NEW DELHI, WEDNESDAY, JANUARY 22, 2020/MAGHA 2, 1941 (SAKA)))

Most of these amendments address issues dealt with by statute in other democracies. However, the Constitution is so specific in spelling out government powers that many of these issues must be addressed by constitutional amendment. As a result, the document is amended roughly twice a year.

The Supreme Court has ruled in Kesavananda Bharati vs State of Kerala case that not every constitutional amendment is permissible; the amendment must respect the basic structure of the constitution, which is immutable. In 2000 the National Commission to Review the Working of the Constitution (NCRWC) was set up to look into updating the constitution.

THE CONSTITUTION OF INDIA ARTICLES IN PART 9