Freedom of expression is a fundamental human right. It reinforces all other human rights, allowing society to develop and progress. The ability to express our opinion and speak freely is essential to bring about change in society. the right to express your views aloud (for example through public protest and demonstrations) or through: published articles, books or leaflets. television or radio broadcasting. works of art. In 1948, the UN recognized free speech as a human right in the International Declaration of Human Rights 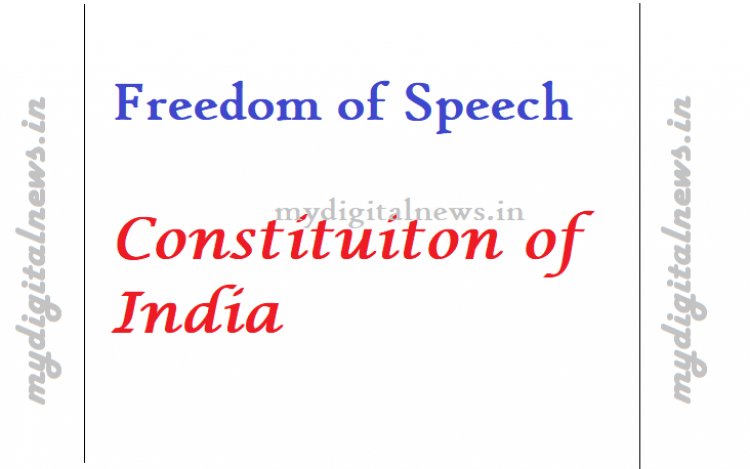 freedom of speech and expression constitution of india , upsc

The usual liberties of the individual are embodied in the Constitution of India, according to which all citizens shall have the right;

• To freedom of speech and expression
• To assemble peacefully and without arms
• To form association or unions
• To move freely throughout the territory of India
• To reside and settle in any part of India.
• To acquire hold and dispose of property
• To practice any profession or to carry on any occupation, trade or business This deals with articles from 19 to 22 of the Constitution of India.

The colonial experience of the Indians made them realise the crucial significance of the Freedom of Press. Such freedom was therefore incorporated in the Constitution; to empower the Press to disseminate knowledge to the masses and the Constituent Assembly thus, decided to safeguard this freedom of the press as a fundamental right.

Although the Indian Constitution does not expressly mention the liberty of the press, it is evident that the liberty of the press is included in the freedom of speech and expression under Article 19(1)(a). But such freedom is not absolute
and it is qualified by certain clearly defined limitations under Article 19(2) in the interests of the public.

It is necessary to mention here that, this freedom under Article 19(1)(a) is not only cribbed, cabined and confined to newspapers and periodicals but also includes pamphlets, leaflets, handbills, circulars and every sort of publication which affords a vehicle of information and opinion.

Thus, although the freedom of the press is guaranteed as a fundamental right, it is necessary for us to deal with the various laws governing the different areas of media so as to appreciate the vast expanse of media laws.

Is there freedom of speech in India?

The Constitution of India provides the right of freedom, given in article 19 with the view of guaranteeing individual rights that were considered vital by the framers of the constitution. The right to freedom in Article 19 guarantees the freedom of speech and expression, as one of its six freedoms.

Laws restricting the freedom of expression

India prohibits hate speech by several sections of the Indian Penal Code, the Code of Criminal Procedure, and by other laws which put limitations on the freedom of expression.

Does freedom of speech and expression cover hate speech also?

Lobbying - What is it ? journalist, is it fraud ?,is it legal or ethical ?