In general, if the national flag (our Indian national flag) is to be flown, except for traitors and enemies of the country, no one will have any problem. ..The work done by the local governments today at the Jinnah Tower in Guntur is atrocious ... it is a complete disgrace to our freedom fighters and to our country’s soldiers ... too. Jinnah tower, Guntur jinnah tower flag hoisting issue, republic day issue jinnah tower, Anil behara, patibandla ramakrishna, 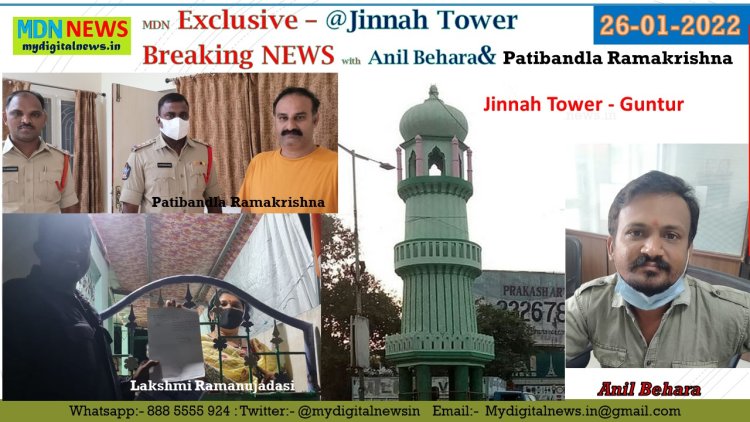 MDN / 26012022 / GNTAP: Republic Day means ... coming to school or college and sitting in the assembly and watching the flag fly and not eating sweets .... feeling proud that we are Indian.. is not a right but a responsibility. Complete violation of the right. The controversy began with a demand to change the name of the tower. BJP leaders say it is an insult to the country to have a centre with the name of a traitor even after 75 years.

The controversy was sparked by recent warnings by BJP leaders, especially district presidents Patibandla Ramakrishna and Anil Behera, to change its name or demolish it.

BJP national secretary Satyakumar's tweet on Jinnah Tower has caused a stir. After that Telangana BJP leader, Gosha Mahal MLA Rajasinghe made sensational remarks. Rajasinghe demanded that the Andhra Pradesh government immediately change the name of the Jinnah Center. BJP activists commented that if the government did not respond, the Jinnah Tower would be demolished. They immediately demanded that the name be removed and that it be named after the freedom fighters

We can fly the national flag over Lal Chowk in Kashmir but fly over Jinnah Tower in Guntur, does that mean arrests notice ....?

Is Guntur in Pakistan or Hindustan?

In the words of Lakshmi Ramanuja Dashi

In the capital Delhi on the one hand, Manyu, our beloved Prime Minister, delivered speeches like "Swami Vivekananda, one of their aspirations is coming true .. Nationalism rising through the clouds of pseudo-secularism ..." "Vedas to Metaverse". .. Macaulay's anthem for education system. India with the newest national education system .. Embark on change .. Respect for ancient Indian science and education system for years after independence .. With Republic Day wishes "

In the belly of our city river, the hoisting of the national flag over the Jinnah Tower is depicted as a major crime, and I was given house arrest notices overnight and kept motionless ...

In the words of Patibandla Ramakrishna

Meanwhile, Pativandla Ramakrishna, a BJP district working president - a celebrity - a social worker - said that the house arrest by the police after he expressed support for the Jinnah Tower project in Chalo was something that Hindu communities, nationalists and fans could not digest.

In the words of GVL Narasimha Rao

The Indian flag was hoisted today at Lal Chowk in Srinagar. But in Guntur, AP, the Indian flag was not allowed on the "Jinnah Tower". Is @YSJagan less patriotic for Muslims in Guntur?  BJP4Andhra House arrest of Guntur President P. Ramakrishna Gari is wrong.


On the occasion of Republic Day ... the Jinnah Tower controversy erupted once again in Guntur. The announcement by the Hindu United Fighting Forum that the national flag would be hoisted over the Jinnah Tower led to intense tensions.