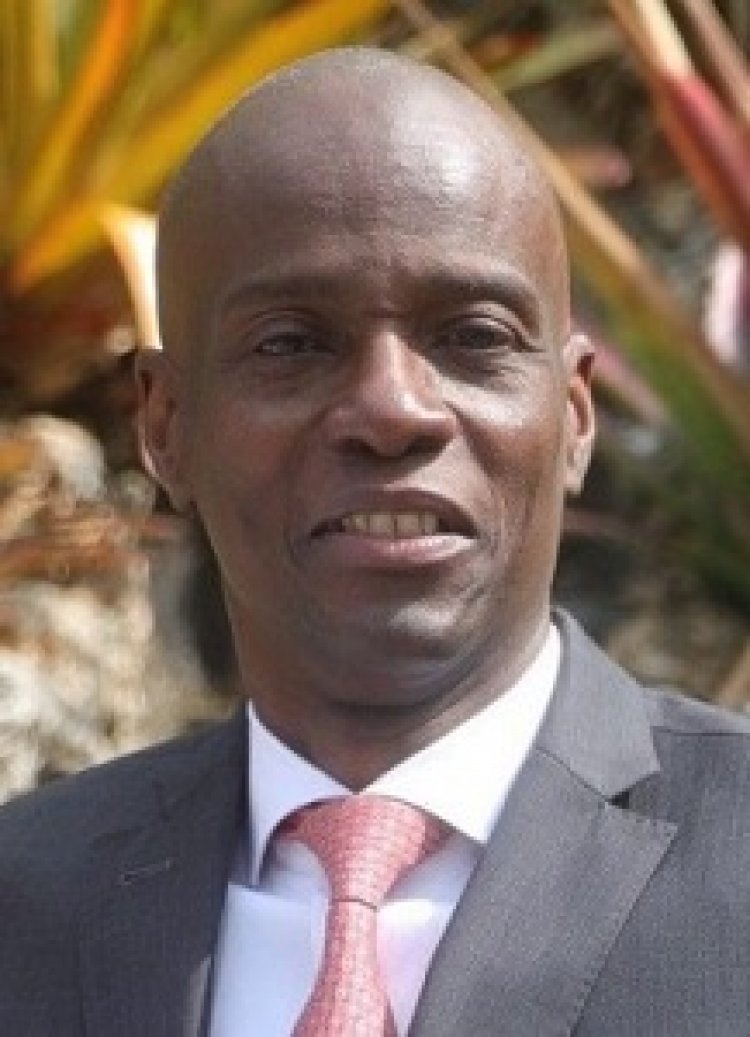 Jovenel Moïse was a Haitian entrepreneur and politician who served as the president of Haiti from 2017 until his assassination in 2021. He was sworn in as President in February 2017 after winning the November 2016 election. In 2019, political unrest and calls for his resignation became a crisis In the early morning of 7 July 2021, Moïse was assassinated and his wife Martine was injured during an attack on their private residence in Pétion-Ville. Interim Prime Minister Claude Joseph succeeded him as acting President.

Jovenel Moïse was born in Trou du Nord, Nord-Est, Haiti, on 26 June 1968. In July 1974, his family moved to Port-au-Prince, where he continued his primary studies at École Nationale Don Durélin, and followed up with his secondary studies first at Lycée Toussaint Louverture, and then at Centre Culturel du Collège Canado-Haïtien. In 1996, he married his classmate Martine Marie Étienne Joseph. That same year, they left the capital and established themselves in Port-de-Paix to develop rural areas.

With little investment capital, Moïse launched his first business in Port-de-Paix, JOMAR Auto Parts, which is still in operation today. That same year, he began the development of an agricultural project of organic banana production from a plantation extending to over 10 hectares (25 acres) of land in the Nord-Ouest department.

In 2001, Moïse partnered with Culligan to start a drinking water plant for distribution to the Nord-Ouest and Nord-Est departments. In 2012, he founded AGRITRANS SA, introduced the agricultural project NOURRIBIO to Trou du Nord, and helped create Haiti's first agricultural free trade zone, a 1000-hectare (2,500-acre) banana plantation in Nord-Est. This project was supposed to export bananas to Germany, for the first time since 1954; however, only two containers were ever sent.

This nonetheless led him to be nicknamed Nèg Bannann (Banana Man). Agritrans intended to create about 3,000 jobs; however, it created only 600 jobs by March 2015.

Political career In 2015, President Michel Martelly designated Moïse as the presidential candidate of the political party Martelly founded, the centre-right Haitian Tèt Kale Party (PHTK). In his campaign, Moïse promoted bio-ecological agriculture as an economic engine for Haiti, whose population is over 50% rural.

He also expressed support for policies pursued by Martelly: universal education and health care, energy reform, rule of law, the creation of sustainable jobs, environmental protection, and the development of Haiti as a destination for ecotourism and agritourism. Moïse received 32.8% of the votes in the first round of the elections held on 15 October 2015, with 54 candidates competing, qualifying for a runoff with the second-place finisher, Jude Célestin.

However, an exit poll conducted by the Haiti Sentinel reflected Moïse receiving only 6% of the vote, and Célestin and many observers called the results fraudulent. Thousands of people took to the streets in violent protests, forcing the postponement of the runoff election.

In their wake, the ballot was ultimately annulled in June 2016. In February 2016, after incumbent President Michel Martelly stepped down at the end of his term, special elections were held by parliament and Jocelerme Privert was then installed as interim President, until new elections could be held.

On 27 November 2016, election officials said Moïse had won the 2016 election in the first round based on preliminary results, with an estimated voter turnout of 21%, beating out 26 other candidates—four of whom claimed victory, before the official results were announced. Moïse faced challenges to his mandate, from opposition leaders who believed that Moïse's mandate should end from the date of the inconclusive 2015 elections.

At the presidential level for the November 2016 elections, over a year after the previous election was annulled following allegations of fraud, Jovenel Moïse of PHTK came in first place with 55.67 per cent of the vote.

Moïse secured the presidency without having to compete in a second-round election. In second, third, and fourth place were mechanical engineer Jude Celestin of LAPEH with 19.52 per cent, leftist senator Jean-Charles Moïse of the Platform Petit Dessalines (PPD) with 11.04 per cent, and Maryse Narcisse of Fanmi Lavalas (FL) with 8.99 per cent. Jovenel Moïse was sworn in on 7 February 2017 for a five-year term.

In November 2019, Moïse met at the Haiti National Palace with U.S. Ambassador to the United Nations, Kelly Craft, about ways to implement a consensual resolution of Haiti's political crisis through inclusive dialogue.

Craft later met with several political leaders from other parties, listened to their different views, and urged an inclusive solution with Moïse. She also urged the Haitian government to fight corruption, investigate and prosecute human rights abusers, and combat narcotics and human trafficking.

They started shooting his office and bedroom and then ransacked the two rooms. The group shot Moïse multiple times, killing him at the scene. He was shot with a total of 12 bullets.

First Lady Martine Moïse was hospitalized due to severe wounds sustained during the attack, and was stated to be in critical condition. Their three children hid in other rooms and escaped unharmed, while two domestic staff members had been tied up by the attackers but were not shot.

A press release issued later that day from the office of the interim Prime Minister Claude Joseph blamed the attack on "a group of unidentified individuals". Joseph also stated that they carried military rifles and spoke both English and Spanish.

Neighbours of Moïse claimed to have heard heavy machine-gun fire shortly after the attack. Video taken by residents living near the site of the attack contains the voice of one man, speaking in English, who claimed over a megaphone during the attack to be a member of the U.S. Drug Enforcement Administration; however, the assailants did not belong to the agency.

The sounds of drones flying, and an explosion, possibly a grenade, were also reported. According to those who filmed the attack, the assailants had also disarmed Moïse's security.

The group responsible for the assassination and their motives are unknown. By 8 July, the Haitian National Police had killed three men who were suspected of participating in the assassination, and a further seventeen men were detained. Also, eight of the attackers were reported to be still on the run.

The group spoke in both Spanish and English languages. Two people from South Florida are known to be among those arrested, including James Solages, who is a resident of Fort Lauderdale and was born in Jacmel in Haiti.

Solages had in past described himself as a former bodyguard for the Embassy of Canada in Haiti, an "advocate for children" and a promising politician. He had also established a charity in South Florida to assist its residents. Another was identified as Joseph Vincent, a 56-year old man from Miami.

The Government of Colombia meanwhile said that six of the suspects, including two who were killed, were retired members of the National Army of Colombia. Interim Prime Minister Joseph said that most of the attackers had been arrested. Police chief Léon Charles later said that 28 attackers – 26 Colombians and two Haitians – have been identified. He added that they had come to Haiti with the goal of killing Moïse.

Moïse was awarded the Order of Brilliant Jade with Grand Cordon by the President of Taiwan, Tsai Ing-wen, in May 2018. Tsai commended the economic initiatives undertaken by Moïse's government.