a bookkeeping system that a government uses to measure the level of the country's economic activity in a given time period. Accounting records of this nature include data regarding total revenues earned by domestic corporations, wages paid to foreign and domestic workers, and the amount spent on sales and income taxes by corporations and individuals residing in the country. 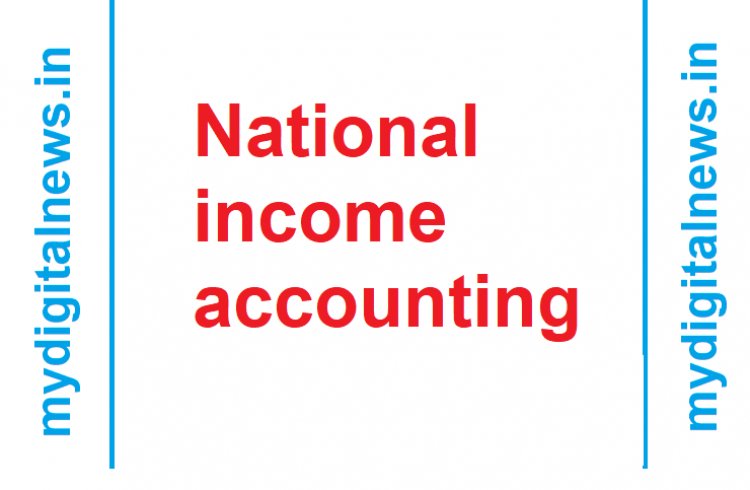 The quantitative information associated with national income accounting can be used to determine the effect of various economic policies. Considered an aggregate of the economic activity within a nation, national income accounting provides economists and statisticians with detailed information that can be used to track the health of an economy and to forecast future growth and development.

The data can provide guidance regarding inflation policy and can be especially useful in the transitioning economies of developing nations, as well as statistics regarding production levels as related to shifting labour forces.

This data is also used by central banks to set and adjust monetary policy and affect the risk-free rate of interest that they set. Governments also look at figures such as GDP growth and unemployment to set fiscal policy in terms of tax rates and infrastructure spending.

Although national income accounting is not an exact science, it provides useful insight into how well an economy is functioning, and where monies are being generated and spent. When combined with information regarding the associated population, data regarding per capita income and growth can be examined over a period of time.

Some of the metrics calculated by using national income accounting include the gross domestic product (GDP), gross national product (GNP), and gross national income (GNI). The GDP is widely used for economic analysis on the domestic level and represents the total market value of the goods and services produced within a specific nation over a selected period of time.

National Income Accounting refers to the practice of calculating the output of an economy. It helps in assessing how the economy is doing. Some of the most standard identities used are GDP, GNP, National Income, etc. We will be studying those in detail once we cover the basics.

Since GDP is the most important identity and all other identities are derived from it, we will cover it first.

Gross Domestic Product (GDP) is the monetary value of all the finished goods and services produced within a ‘domestic territory’ in a specific time period. As evident, it is tied to a specific territory – a country’s border irrespective of the person producing it. That person could be a citizen or a foreign national.

Let’s take a hypothetical economy that produces 10 cars. The manufacturer purchases all components like tyres, glass, etc for Rs. 40, pays rent for Rs. 30 and pays labour for Rs. 10. Finally, sells the car for Rs. 100.

The GDP for this economy will be 10X100 = 1000. We didn’t include the cost of components like tyres, glass, etc because they were not final goods in themselves. They were consumed in the manufacturing of cars.

(i) Territory lying within the political frontiers, including territorial waters of the country.

(ii) Ships and aircrafts operated by the residents of the country between two or more countries.

Value Added Method: The sum of the value of all final goods and services produced.

Let’s suppose there is the only kind of production process taking place in the economy. they are the farmers growing grapes and wine producer. The farmer needs only human labour to grow grapes. The farmers sell a part of the produced grapes to the wine manufacturers. The manufacturer uses grapes as inputs to produce wine.

What will be the total value added in this entire process?

The farmer grows grapes of Rs 1000 which will be added to the total value-added since that’s the final output produced by the farmers.

The baker used grapes worth Rs 500 as an input to produce wine worth of Rs 1500. The input used by the baker must be subtracted from the final output of wine produced by him (1500-500=1000). The reason for the deduction is that, we have already included the value of grapes produced by the farmer in the value added. If we now again include this in calculating value added we commit the mistake of Double counting- counting a product twice while calculating final output.

The raw materials that a firm buys from another firm that are completely used up in the process of production are called ‘intermediate goods’. Therefore,

The value-added of a firm = Value of production of the firm – Value of intermediate goods used by the firm.

The value-added of a firm is distributed among its four factors of production, namely, labour, capital, entrepreneurship and land. Therefore wages, interest, profits and rents paid out by the firm must add up to the value-added of the firm.

Income Method: The sum of all incomes accruing to factors of production, i.e., Rent, Interest, Profit and Wages.

The sum of final expenditures in the economy must be equal to the incomes received by all the factors of production taken together (final expenditure is the spending on final goods, it does not include spending on intermediate goods). This follows from the simple idea that the revenues earned by all the firms put together must be distributed among the factors of production as salaries, wages, profits, interest earnings and rents.

Expenditure Method: The sum of consumer’s expenditure, net investment, and government expenditure on goods and services.

I, Investment expenditure incurred by firms on capital goods

G, expenditure incurred by government on the purchase of final goods and services produced by the firms

X, Exports revenues earned by firms by selling its goods and services abroad

Circular Flow of Money and Methods of Calculating National Income

We will discuss a simple economic model depicting how money flows through the economy.

Money changes hand from one sector to another.

Companies/Firms use 4 kinds of inputs that are used in the production of goods and services in order to make an economic profit. These 4 inputs are land, labor, capital, and entrepreneurship and are known as factors of productions.

Thus, we see, that money flows from business firms to households and then it flows from Household to firms. This money flow is called the circular flow of income.

Saving and Investment in the Circular Flow

Along with consumption, the households also save(S) part of their money. When Households save, their expenditure on the purchase of goods and services decline. The decline in the purchase will result in a decline in the money received by firms. This will result in less money flow to the household as the firms will reduce hiring and production operations. Thus, saving act as a leakage from the economic system.
But the important question to ask is, where will savings go in the economy?
The savings in the economy does not lead to any reduction in aggregate spending and income as the savings flows back into the economic system through Financial Markets (Banks, Stock markets, insurance etc.) From Financial Markets, the savings flows back to the Business firms who borrow them and invest it into new forms of investments.
Thus, the saving which is a leakage in the system also flows back into the system through investment by a firm which acts as injections.

Government Sector in the Circular Flow

Government affects the economy in a number of ways.

The main components of government intervention are

in the form of

Because the money circulates, it leads to the following methods of GDP calculations.

India’s Central Statistical Office (CSO) introduced the new series of National Accounts Statistics (NAS) with the base year 2011-12, replacing the earlier series with 2004-05 as the base year. This is a routine matter for the CSO – as with statistical offices of most countries – to change the base year of the NAS periodically to account for structural changes in the economy, relative prices, and to replace older survey data with newer ones to better capture the economic activities. This time around the revision also had another objective, that is, to update the underlying methodology of NAS to the most recent international guidelines, namely, the UN System of National Accounts, 2008 (SNA 2008).

The following changes were made by the CSO while calculating GDP:

Replacing GDP at factor cost and GDP at market price with gross value added at basic prices and GDP respectively.

Further, the GDP structure is also different now. While the public sector share in GDP remains unchanged, the share of private sector corporates is higher in new series by some 11 percent and the share of unorganised sector declined from 56 to 44 percent.