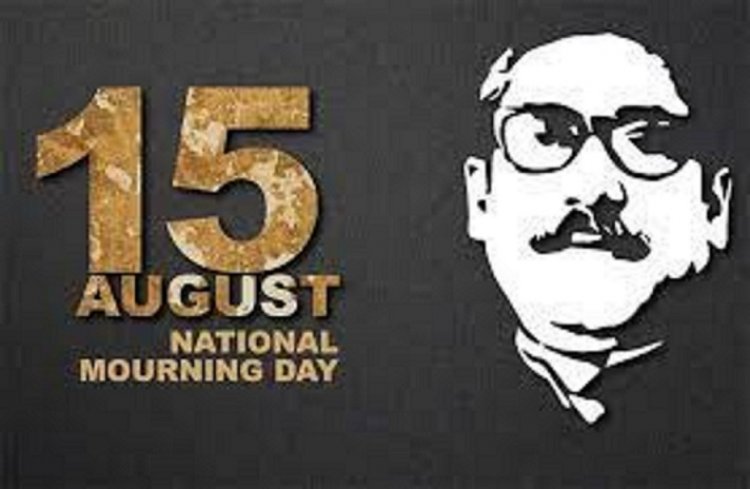 Which day is observed as National Mourning Day in Bangladesh?

Sheikh Mujibur Rahman (17 March 1920 – 15 August 1975), often shortened as Sheikh Mujib or Mujib, was a Bangladeshi politician and statesman. He is sometimes referred to as the "Father of the Nation" in Bangladesh. He served as the first President of Bangladesh and later as the Prime Minister of Bangladesh from 17 April 1971 until his assassination on 15 August 1975.

Sheikh Mujibur Rahman is considered to have been the driving force behind the independence of Bangladesh. He is popularly dubbed with the title of "Bangabandhu" (Bôngobondhu "Friend of Bengal") by the people of Bangladesh.

Sheikh Mujibur Rahman became a leading figure in and eventually the leader of the Awami League, founded in 1949 as an East Pakistan–based political party in Pakistan. Mujib is credited as an important figure in efforts to gain political autonomy for East Pakistan and later as the central figure behind the Bangladesh Liberation Movement and the Bangladesh Liberation War in 1971.

Thus, he is regarded by many as the "Jatir Janak" or "Jatir Pita" (Jatir Jônok or Jatir Pita, both meaning "Father of the Nation") of Bangladesh. His daughter Sheikh Hasina is the current leader of the Awami League and also the Prime Minister of Bangladesh. An initial advocate of democracy and socialism, Mujib rose to the ranks of the Awami League and East Pakistani politics as a charismatic and forceful orator.

Sheikh Mujibur Rahman became popular for his opposition to the ethnic and institutional discrimination of Bengalis in Pakistan, who comprised the majority of the state's population. At the heightening of sectional tensions, he outlined a six-point autonomy plan and was jailed by the regime of Field Marshal Ayub Khan for treason. Mujib led the Awami League to win the first democratic election of Pakistan in 1970.

Despite gaining a majority, the League was not invited by the ruling military junta to form a government. As civil disobedience erupted across East Pakistan, Mujib indirectly announced the independence of Bangladesh during a landmark speech on 7 March 1971.

On 26 March 1971, the Pakistan Army responded to the mass protests with Operation Searchlight, in which Prime Minister-elect Mujib was arrested and flown to solitary confinement in West Pakistan, while Bengali civilians, students, intellectuals, politicians and military defectors were murdered as part of the 1971 Bangladesh genocide.

During Mujib's absence, many Bengalis joined the Mukti Bahini and with help from the Indian Armed Forces, defeated the Pakistan Armed Forces during the Bangladesh Liberation War.

After Bangladesh's independence, Mujib was released from Pakistani custody due to international pressure and returned to Dhaka in January 1972 after a short visit to Britain and India. Mujib became the Prime Minister of Bangladesh under a parliamentary system adopted by the new country.

The Awami League won a huge mandate in the country's first general election in 1973. However, Mujib faced challenges of rampant unemployment, poverty and corruption, as well as the Bangladesh famine of 1974.

The government was criticized for denying constitutional recognition to indigenous minorities and human rights violations by its security forces, notably the National Defence Force or Jatiya Rakkhi Bahini paramilitary.

Amid rising political agitation, Mujib initiated one-party socialist rule in January 1975. Six months later, he and most of his family were assassinated by renegade army officers during a coup. A martial law government was subsequently established. In a 2004 BBC poll, Mujib was voted the Greatest Bengali of all time.