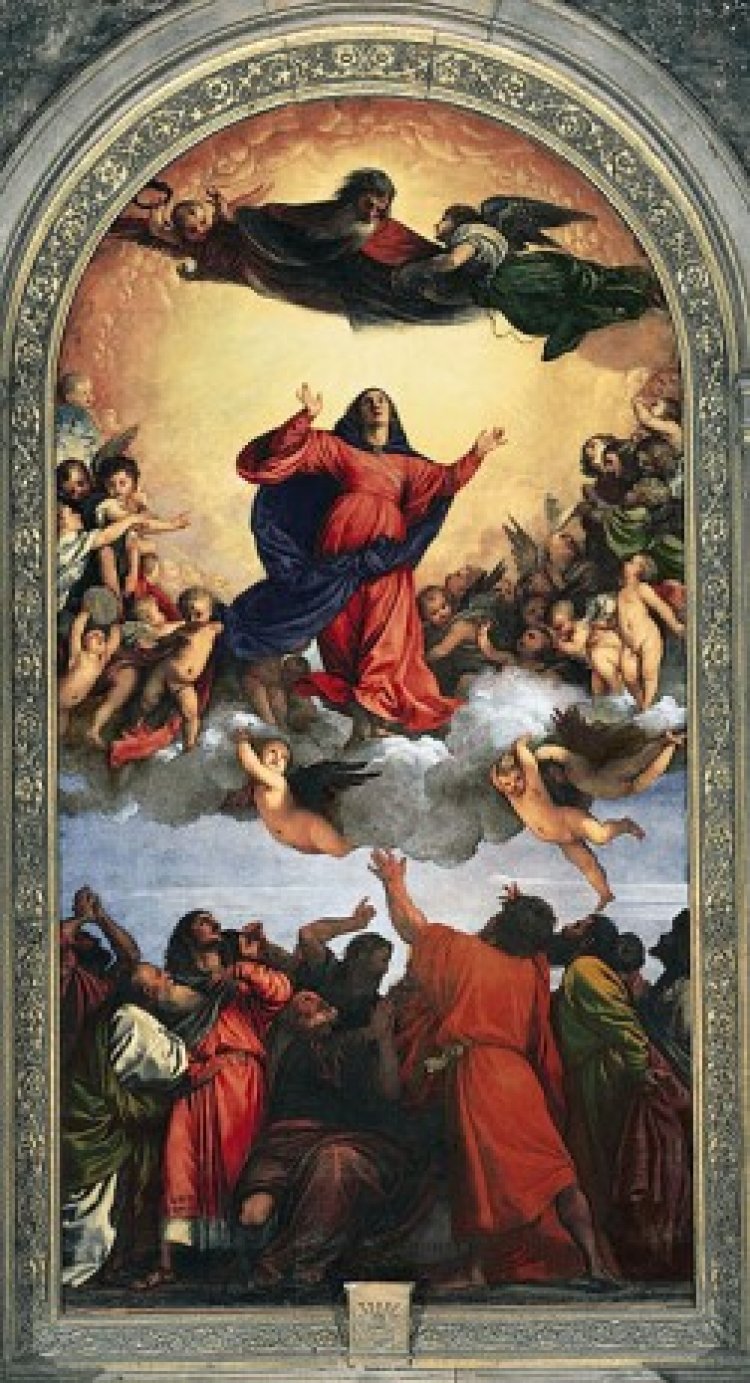 The Assumption of Mary (name in full Assumption of the Blessed Virgin Mary) is, according to the beliefs of the Catholic Church, Eastern Orthodox Churches, Oriental Orthodoxy, Church of the East, and some Lutheran and Anglo-Catholic Churches, among others, the bodily taking up of Mary, the mother of Jesus, into Heaven at the end of her earthly life.

The analogous feast in the Eastern Churches is known as the Dormition of the Theotokos. In Lutheranism and Anglicanism, the feast is celebrated in honour of St. Mary, Mother of our Lord.

In the churches that observe it, the Assumption is a major feast day, commonly celebrated on 15 August. In many countries, the feast is also marked as a Holy Day of Obligation in the Catholic Church.

The Assumption of the Virgin Mary in art has been a popular subject, especially since the 12th century. The Catholic Church teaches as dogma that the Virgin Mary "having completed the course of her earthly life, was assumed body and soul into heavenly glory".

This doctrine was dogmatically defined by Pope Pius XII on 1 November 1950, in the apostolic constitution Munificentissimus Deus by exercising papal infallibility.

In Munificentissimus Deus (item 39) Pope Pius XII pointed to the Book of Genesis (3:15) as scriptural support for the dogma in terms of Mary's victory over sin and death through her intimate association with "the new Adam" (Christ) as also reflected in 1 Corinthians 15:54: "then shall come to pass the saying that is written, Death is swallowed up in victory".

The New Testament contains no explicit narrative about the death or dormition, nor of the Assumption of Mary, but several scriptural passages have been theologically interpreted to describe the ultimate fate in this and the afterworld of the Mother of Jesus. Various apocryphal documents do contain narrations of the event.

What does the Bible say about the Assumption of Mary?

A: Like the dogma of Mary's Immaculate Conception, the dogma of the Assumption is not explicitly stated in the Bible. The teaching that 'at the end of her earthly course, Mary was assumed into heavenly glory, body and soul' was dogmatically defined by Pius XII in 1950 in Munificentissimus Deus.

What do we mean by the Assumption of the Blessed Virgin Mary?

Roman Catholics believe the doctrine of the Assumption, which teaches that at the end of her life, Mary, the mother of Christ, was taken body and soul (i.e. both physically and spiritually) into heaven to live with her son (Jesus Christ) forever.

DigitalOcean $5/month: How many visitors per day for My website?