Puchalapalli Sundarayya (Born Sundararami Reddy on 1 May 1913 – 19 May 1985) popularly known as Comrade PS was an Indian Communist politician leader and a peasant revolt in the former Hyderabad State of India, called the Telangana Rebellion and he was also one of the founding member of Communist Party of India (Marxist).[1][2]He was so dedicated to the upliftment of the poor that he and his spouse chose not to have children, for the purpose of social service. He directly participated in the Telangana armed struggle against the imperialism of the Nizam of Hyderabad. Sundarayya remained General Secretary of the Communist Party of India (Marxist) until 1976. 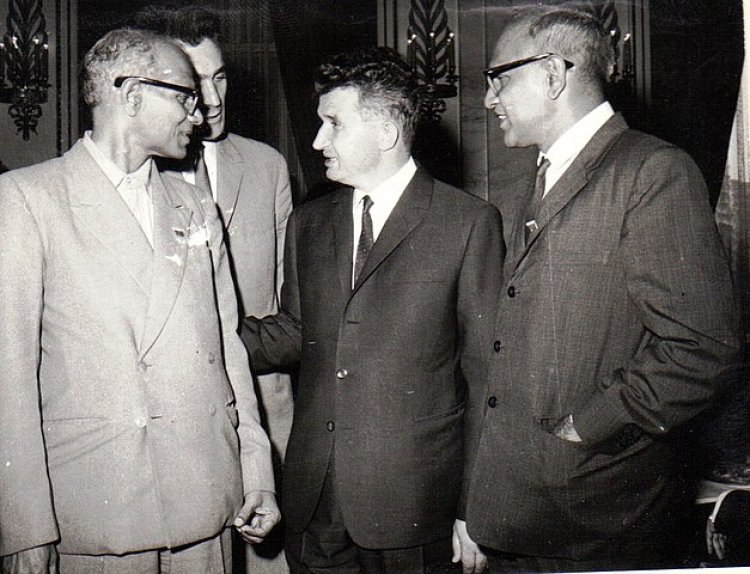 Sundarayya was born on 1 May 1913 in Alaganipadu (in the present Vidavalur Mandal of Kovur Constituency) in Nellore district of Andhra Pradesh, India. He was the child of a feudal family and, when Sundarayya was six, his father died.

He completed primary education and entered a college where he studied at entry level until he left in 1930, at the age of 17, to join Gandhi's Non-Cooperation Movement. He was arrested and spent time in a Borstal school in Rajahmundry where he became acquainted with various communists and local dalit leaders.

When released, he organized agricultural workers in his village to protest against bonded labour. He was mentored by Amir Hyder Khan, who prompted him to become a member of the Communist Party of India, which was condemned and banned by the British government during the Second World War.

After the arrest of Amir Hyder Khan, following the directions of the Central Committee, the task of building the Party in South India fell on his shoulders. During this period, he motivated transition of prominent communist leaders of Kerala like E. M. S. Namboodiripad and P. Krishna Pillai to join the Communist Party of India from the Congress Socialist Party.

In 1934, Sundarayya became a member of the Central Committee of the Communist Party of India. During the same year, he became one of the founders of the All India Kisan Sabha and was elected as its joint secretary. When the Party was banned, he went underground between 1939 and 1942.

When the ban on the Party was lifted in 1943, the first Party Congress was held at Bombay and he was again elected to the Central Committee in the second party Congress held at Calcutta (now called: Kolkata). In that Congress, the Communist Party of India adopted a line advocating armed struggle, that came to be known as the 'Calcutta thesis'.

It was closely identified with its main proponent, the then General Secretary B.T. Ranadive. As a result, insurgencies took place in Tripura, Telangana, West Bengal and Travancore. The most important rebellion took place in Telangana, against the Nizam of Hyderabad state. Sundarayya, was one of its leaders.

He was elected to the Central Executive and the Central Secretariat of the Party at the fifth Party Congress at Amritsar. At this time the internal conflict within the Communist Party of India had heightened. The Party leadership under S.A. Dange were in favour of supporting the Indian Government headed by the Indian National Congress at the time of the Sino-Indian War.

Also, following the Sino-Soviet differences of the International Communist Movement, the Party leadership under Dange was pursuing the USSR line, which the pro-Chinese leadership within the Party called revisionist. The group under Dange was referred to as the "Rightists", and the other group, "Leftists".

Sundarayya was a prominent leader of the leftist group and he resigned the positions conferred upon him during the Amritsar congress of the Party, protesting against the policies of the dominant leadership of the Party. He was arrested and imprisoned in November 1962 at the time of the India-China border war.

The split came out in open and the leftists organized the Seventh Party Congress in October–November 1964 and formed a new party called the Communist Party of India (Marxist). Sundarayya was elected as its General Secretary.

However, immediately after this conference, Sundarayya and several Party leaders were arrested because of a ruling produced by the Congress government, and they were detained until May 1966.

Again, he went underground to evade arrest during the period of the then Indian Prime Minister, Indira Gandhi, who evoked Emergency provisions of the Indian Constitution, between 1975–1977, to suspend Constitutionally guaranteed 'fundamental rights. Sundarayya remained the Party's General Secretary until 1976.

In that year, he decided to resign from his post as the Party's General Secretary and gave up his Politburo membership, for what he called the "revisionist habits" acquired by the Party.

In 1952, he was elected to the Upper House of the Indian Parliament, the Rajya Sabha from the Madras Assembly constituency and became the leader of the Communist group in Parliament.

He went to Parliament on a bicycle at a time when most of the MPs were either zamindar or hailed from aristocratic families who arrived in luxury cars. He was elected to the State assembly of Andhra Pradesh and remained a member of that House until 1967.

After a long gap he contested again and got elected to the State assembly of Andhra Pradesh in 1978, he continued this up to 1983. Sundarayya held the party's state Secretary post in Andhra Pradesh and was a member of the Central Committee of the Party from this period to his death on 19 May 1985.