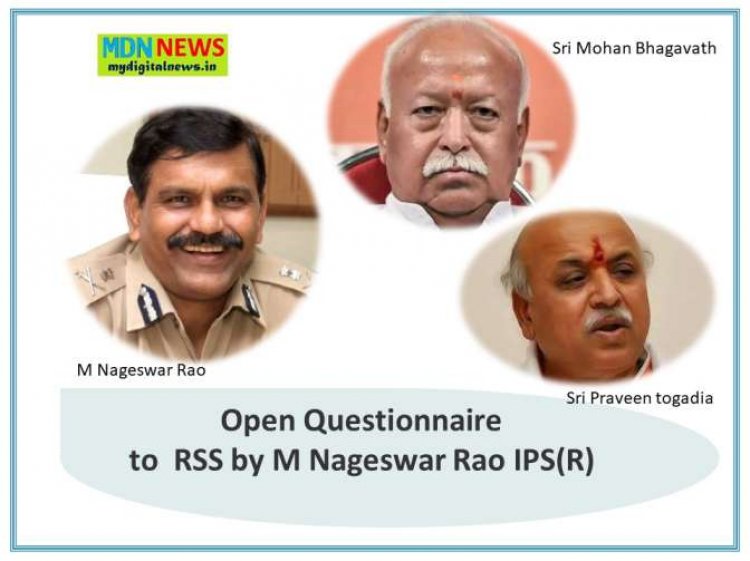 It is a well-known fact that the recent evolutionary scene i.e. the speech of Shri Mohan Bhagwat Ji, and the counter video of Shri Dr Praveen Togadia Ji created a sensation. Mohan Bhagwat's speech has caused a great deal of suspicion in Hindu and Hindu communities. In this context, Mr M Nageswar Rao IPS(R) took to the Twitter platform and showered public questions on RSS. The RSS was showered with public questions From Netizens.

An official clarification by RSS.org on the following is an absolute need of the hour:

3.Further, if it is so how does M&C Rashtriya Manch promote H-interests?

4. Do M&C organisations have similar bodies for Hs?

5.If not, then why RSS should have them?

6.If RSS is not a H-organization, then what business it has to talk about &interfere in H-religious issues? 2/2

Who is Nageswar Rao IPS: Mannem Nageswara Rao is a former interim Director officer Central Bureau of Investigation (CBI) from 11 January 2019 till 1 February 2019. He joined CBI in 2016 and is an Indian Police Service (IPS) officer of the 1986 batch and Odisha cadre. He served as Joint Director before being appointed as the Interim Director of CBI. M Nageswar Rao is from the Mangapet village of Warangal district in Telangana State. He is a chemistry postgraduate from Osmania University, did his research in Madras IIT, before joining the IPS in 1986.

MHA: CBI to Inquire into the 2 Deaths of Ms. Rosy Sangma...

Mamata Banerjee agrees to caste census if all parties agree