Mandhana was born on 18 July 1996 in Mumbai to Smita and Shrinivas Mandhana. When she was two, the family moved to Madhavnagar, Sangli in Maharashtra, where she completed her schooling. Both her father and brother, Shravan, played cricket at the district-level, for Sangli. She was inspired to take up cricket after watching her brother play at the Maharashtra state Under-16s tournaments. At the age of nine, she was selected in Maharashtra's Under-15 team. At eleven, she was picked for the Maharashtra Under-19s.......... 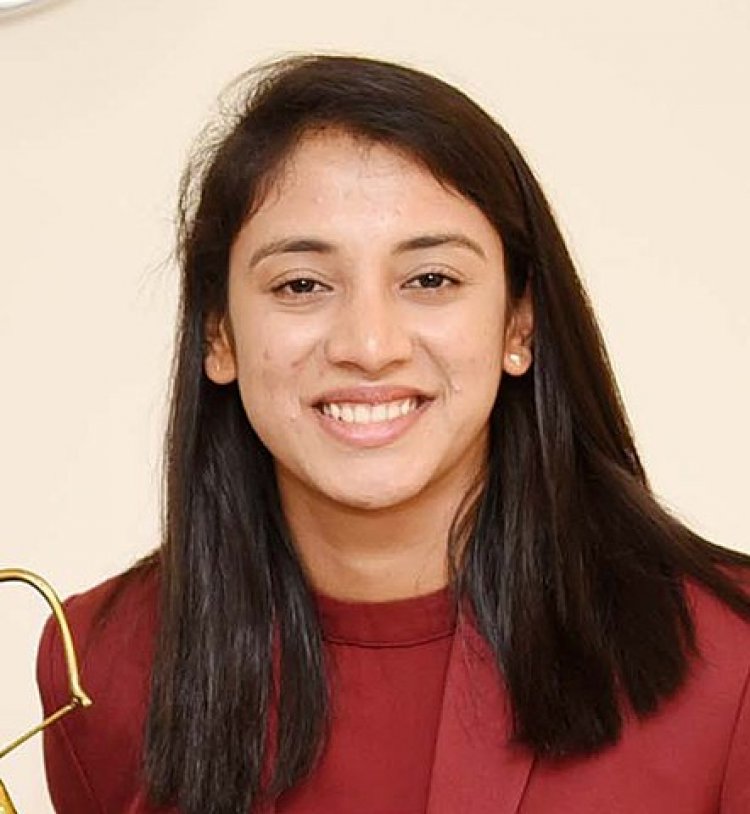 Smriti Shriniwas Mandhana (born 18 July 1996) is an Indian cricketer who plays for the Indian women's national team. In June 2018, the Board of Control for Cricket in India (BCCI) named her as the Best Women's International Cricketer. In December 2018, the International Cricket Council (ICC) awarded her with the Rachael Heyhoe-Flint Award for the best female cricketer of the year. She was also named the ODI Player of the Year by the ICC at the same time.

Mandhana was born on 18 July 1996 in Mumbai to Smita and Shrinivas Mandhana. When she was two, the family moved to Madhavnagar, Sangli in Maharashtra, where she completed her schooling.

Both her father and brother, Shravan, played cricket at the district-level, for Sangli. She was inspired to take up cricket after watching her brother play at the Maharashtra state Under-16s tournaments. At the age of nine, she was selected in Maharashtra's Under-15 team. At eleven, she was picked for the Maharashtra Under-19s team.

Mandhana's family is closely involved in her cricketing activities. Her father Shrinivas, a chemical distributor, takes care of her cricket programme, her mother Smita is in charge of her diet, clothing and other organisational aspects, and her brother Shravan still bowls to her in the nets.

Her first breakthrough came in October 2013, when she became the first Indian woman to achieve a double-hundred in a one-day game. Playing for Maharashtra against Gujarat, she scored an unbeaten 224 off 150 balls in the West Zone Under-19 Tournament, at the Alembic Cricket Ground in Vadodara.

In the 2016 Women's Challenger Trophy, Mandhana scored three half-centuries for India Red in as many games and helped her team win the trophy by making an unbeaten 62 off 82 balls in the final against India Blue. With 192 runs, she emerged as the tournament's top scorer.

In September 2016, Mandhana was signed up for a one-year deal with Brisbane Heat for the Women's Big Bash League (WBBL), and along with Harmanpreet Kaur, became one of the first two Indians to be signed up for the League.

Playing against Melbourne Renegades in January 2017, she fell awkwardly while fielding after bowling the final ball of her over hurting her knee. She was ruled out of the rest of the tournament which she ended having scored 89 runs in 12 innings.

In June 2018, Mandhana signed for Kia Super League defending champions Western Storm, becoming the first Indian to play in the league. In November 2018, she was named in the Hobart Hurricanes' squad for the 2018–19 Women's Big Bash League season.

Mandhana made her Test debut in August 2014 against England at Wormsley Park. She helped her team to win the match by scoring 22 and 51 in her first and second innings, respectively; in the latter innings, she shared in an opening-wicket partnership of 76 runs with Thirush Kamini, chasing 182.

In the second ODI game of India's tour of Australia in 2016 at the Bellerive Oval in Hobart, Mandhana scored her maiden international hundred (102 off 109 balls), in a losing cause.

Mandhana was the only Indian player to be named in the ICC Women's Team of the Year 2016. Mandhana came into the team for the 2017 World Cup after recovering from an injury she sustained, an anterior cruciate ligament rupture, during her time at the WBBL in January that year.

In her five-month recovery period, she missed the World Cup Qualifier and the Quadrangular Series in South Africa. She began the World Cup with a 90 against England in Derby, in the first of the group matches. She helped her team win by 35 runs, and was named the player of the match. followed by her second hundred in a One Day International against West Indies,(106*)

Mandhana was part of the Indian team to reach the final of the 2017 Women's Cricket World Cup where the team lost to England by nine runs. Smriti Mandhana scored the fastest fifty for India in Women's T20Is of just 24 balls against New Zealand in February 2019.

In March 2018, she also scored the fifty for India in a Women's Twenty20 International (WT20I) fixture, taking 30 balls to reach a half-century against Australia in the 2017–18 India women's Tri-Nation Series. The following month, she was named the player of the series, for the three WODI matches played in England. On 3 August 2018, she scored the first century in the 2018 Women's Cricket Super League.

In February 2019, she was named as the captain of India's Women T20I squad for the three-match against England. She became the youngest T20I captain for India when she led the women's team against England in the first T20I in Guwahati.

At 22 years and 229 days, the India women's cricket team opener is taking over from Harmanpreet Kaur, who has been ruled out of the three-match series with an ankle injury. In May 2019, she has won the International Woman Cricketer of the Year awards at CEAT International Cricket Awards 2019.

In November 2019, during the series against West Indies, she became the third-fastest cricketer, in terms of innings, to score 2,000 runs in WODIs, doing so in her 51st innings. In January 2020, she was named in India's squad for the 2020 ICC Women's T20 World Cup in Australia.

In October 2021 Smriti Mandhana becomes the first Indian woman to score a Test century in Australia.