Chhinnamasta whose head is severed, often spelt Chinnamasta, and also called Chinnamastika and Prachanda Chandika and Jogani Maa (in western states of India), is a Hindu goddess (Devi). She is one of the Mahavidyas, ten goddesses from the esoteric tradition of Tantra, and a ferocious aspect of Parvati, the Hindu Mother goddess. The self-decapitated nude goddess, usually standing or seated on a divine copulating couple, holds her own severed head in one hand and a scimitar in another. Three jets of blood spurt out of her bleeding neck and are drunk by her severed head and two attendants. Chhinnamasta is a goddess of contradictions. She symbolises both aspects of Devi: a life-giver and a life-taker. She is considered both a symbol of sexual self-control and an embodiment of sexual energy, depending upon interpretation. She represents death, temporality, and destruction as well as life, immortality, and recreation. The goddess conveys spiritual self-realization and the awakening of the kundalini – spiritual energy. The legends of Chhinnamasta emphasise her self-sacrifice – sometimes coupled with a maternal element – sexual dominance, and self-destructive fury. Chhinnamasta is worshipped in the Kalikula sect of Shaktism, the Goddess-centric tradition of Hinduism. Though Chhinnamasta enjoys patronage as one of the Mahavidyas, temples devoted to her (found mostly in Nepal and eastern India) and her public worship are rare. However, she is a significant Tantric deity, well known and worshipped among esoteric Tantric practitioners. Chhinnamasta is closely related to Chinnamunda – the severed-headed form of the Tibetan Buddhist goddess Vajrayogini. 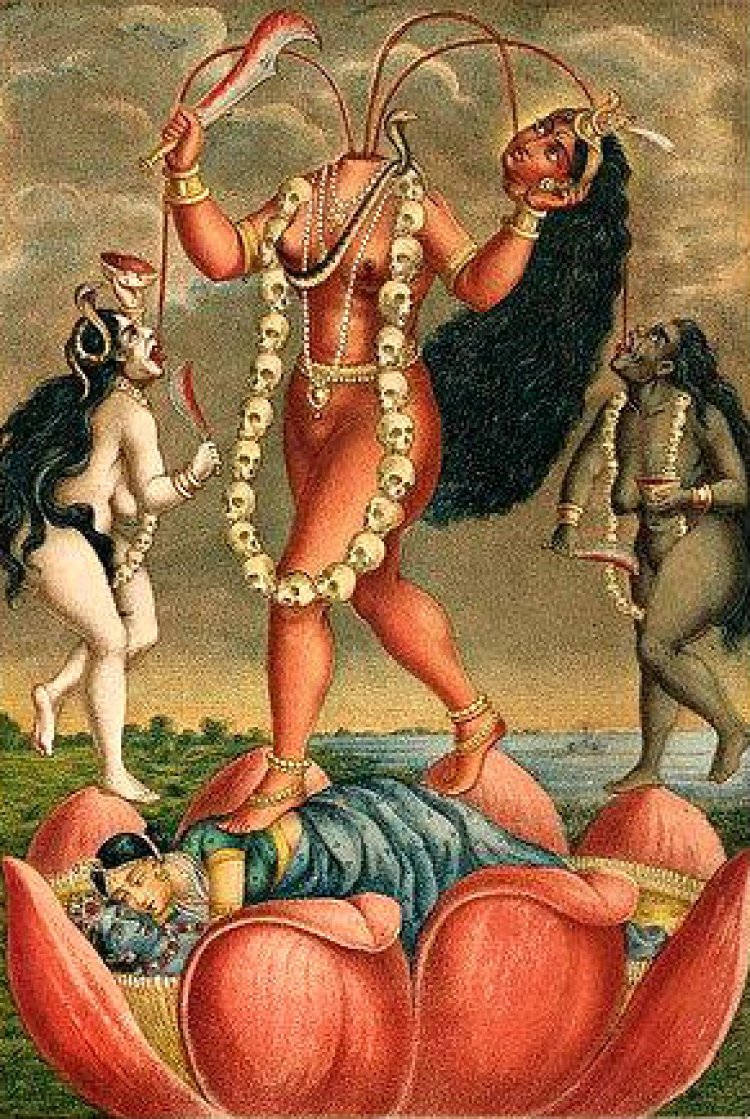 The Hindu Chhinnamasta appears as a significant deity in Tantric and Tibetan Buddhism, where she is called Chinnamunda ("she with the severed head") or Trikaya-vajrayogini ("triple-bodied Vajrayogini").

Chinnamunda is the severed-head form of goddess Vajrayogini (or Vajravarahi, a ferocious form of Vajrayogini), who is depicted similar to Chhinnamasta.

Buddhist texts recount the birth of the Buddhist Chinnamunda. One tale tells of Krishnacharya's disciples, two Mahasiddha ("great perfected ones") sisters, Mekhala and Kanakhala, who cut their heads, offered them to their guru, and then danced.

The goddess Vajrayogini also appeared in this form and danced with them. Another story recalls how the Mahasiddha princess Lakshminkara, cut off her head as a punishment from the king and roamed with it in the city, where citizens extolled her as Chinnamunda-Vajravarahi.

In the early decades of the 20th century, Benoytosh Bhattacharya – an expert on Tantra and the then director of the Oriental Institute of Baroda – studied various texts such as the Buddhist Sadhanamala (1156 CE), the Hindu Chhinnamastakalpa (uncertain date), and the Tantrasara by Krishnananda Agamavagisha (late 16th century).

He determined that the Hindu Chhinnamasta and the Buddhist Chinnamunda were the same goddess, in spite of the fact that the former wears a serpent as a sacred thread and has an added copulating couple in the icon.

Bhattacharyya concluded that the Hindu Chhinnamasta originated from the Buddhist Chinnamunda, who was worshipped by at least the 7th century. Depicted enthroned, a decapitated, dark-complexioned woman wearing a red/orange sari holds a sword in her left hand and her own severed head (with a lotus crown) on a platter in her right hand.

Five seated devotees (including one with a ram's head) with folded hands surround her.

A lake with a large lotus is in the foreground. Chhinnamasta depicted enthroned appears in a benign form contrary to her traditional description, Bundi painting, c. 1775.

While Bhattacharyya's view is mostly undisputed, some scholars such as S. Shankaranarayanan – the author of The Ten Great Cosmic Powers – attribute Chhinnamasta to Vedic (ancient Hindu) antecedents.

Elisabeth A. Benard, the author of Chinnamastā: The Aweful Buddhist and Hindu Tantric Goddess,(The book is referred to as "the first monograph to examine the rituals, symbolisms, and iconographic conventions" of Chhinnamasta.) says that whatever her origins may be, it is clear that Chhinnamasta/Chinnamunda was known in the 9th century and worshipped by Mahasiddhas.

David Kinsley, an expert on Hindu goddesses and former Professor of Religion at McMaster University, agrees with the Buddhist origin theory, but sees other influences, too. Ancient Hindu goddesses, who are depicted nude and headless or faceless, may have also influenced the development of Chhinnamasta.

These goddesses are mainly depicted headless to focus on the display of their sexual organs, thus signifying sexual vigour, but they do not explain the self-decapitation theme. Other nude Hindu goddesses who might have inspired Chhinnamasta are the malevolent war goddess Kotavi and the South-Indian hunting goddess Korravai.

Kotavi, sometimes described as a Matrika ("mother goddess"), is nude, dishevelled, wild, and awful in appearance.

She is mentioned in the scriptures Vishnu Purana and Bhagavata Purana, often as a foe of the god Vishnu. The ferocious, wild Korravai is the goddess of war and victory. Both goddesses are linked to battlefields; Chhinnamasta is not.

Kinsley points out that while there are several bloodthirsty, nude, and wild goddesses and demonesses in Hindu mythology, Chhinnamasta is the only goddess who displays the shocking self-decapitation motif.

The beheading and rejoining motif also appears in the tale of the goddess Renuka; however the self-decapitation is missing in the legend. In the context of her legend, Renuka is given the epithet "Chhinnamasta" ("She whose head is severed").

The mahavidya Chhinnamasta is also associated with Renuka's son Parashurama, who decapitated his mother in the legend. Renuka is the wife of the sage Jamadagni.

Once, seeing a celestial king engaged in sexual enjoyment with a nymph, Renuka developed lust to enjoy similar experience with her husband or lusted for a moment for the king. As a result, she lost her effulgence gained by the power of her non-attachment and chastity.

On the order of his father, Renuka's youngest son Parashurama beheads her after his four elder brothers refuse. Jamadagni burns his four elder sons by his fiery glance for their non-compliance. Pleased with Parashurama's obedience, the sage grants him a boon; Parashurama asks that his mother and his brothers be brought back to life, which is materialized.

Renuka is purified and venerated as a goddess henceforth. The name "Chhinnamasta" is also used as a generic name for goddess icons which do not have heads, such as those at Chinnamasta Bhagawati, Na-kati Bhavani shrine in Aurangabad district, Bihar and the goddess shrine in Uchchaith, Madhubani district, Bihar; these goddesses are not identified with the mahavidya Chhinnamasta.

The icon of Chinnamasta Bhagawati, also known as Shakhada Bhagwati, was found in the spot where her temple currently stands, digging for construction. The icon's head was broken. The icon was consecrated and a temple built; the broken head was replaced by a gold mask, although a silver mask is generally worn by the goddess currently.

The Na-Kati Bhavani icon is associated with Kavyamata, whose head was severed and killed by the god Vishnu and later resurrected by her husband, the sage Bhrigu. The goddess icon depicts a decapitated woman sitting with joined hands and her head on the ground.

She is also identified with Durga's form Siddhidatri and the goddess Kali. She is associated as the goddess who blessed the Sanskrit poet and playwright Kalidasa. The theme of self-decapitation and the severed head is recurring in Indian mythology.

Legends from the Simhasana Dvatrimsika and the Kathasaritsagara speak of how the hero offers blood from his throat as an offering to a goddess. Rajasthani folk tales and songs tell about warrior-heroes (jhumjharji or bhomiya) who cuts off his head before the war or is decapitated in action, but battles on – without his head – slaying foes until he avenges his beheading and dies.

The decapitated body and head motif is not unique to Hinduism and Buddhism and appears across the world, including the Cephalophore saints of Christianity and in Celtic culture.